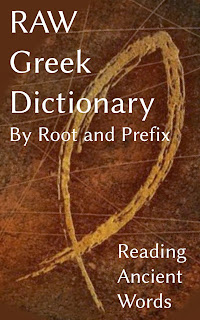 
The simplest Greek word is a root. A few roots stop there, but most take a prefix, which creates a new word. Some of those new words take another prefix. Quite a few words are two roots put together.

Here is one entry from the Simple Greek Dictionary. Notice that it lists seven words, all of which contain the same root:

The first three are simply Root construction. The end of the root is spelled differently for different parts of speech: sophia (noun), sophizo (verb), and sophos (adjective).
The next two are Prefix+Root. So prefix a- and the root as adjective sophos produces another adjective, asophos.
Most prefixes modify the meaning enough to warrant a different translation. The prefix kata- "according to" with the root as verb sophizomai creates a new word with a new meaning.
The last two are Root+Root. Notice they are the same two roots--philo "friend" and sophia "wisdom". Now we know the meaning of philosopher: friend of wisdom.

G# at the end of each line is the Strong's Greek number for that word.
X G# indicates a Root+Root construction. That word is also listed under its other root. Search for the G# again in the Dictionary.
{ } usually contain the original word in Greek or Hebrew. Here, they are empty because the English word is the Greek word.